Application of Fibre Optic Cables in Offshore and Subsea Environment

Communication system in subsea production is consider as one of the most important aspect. In the past, people used to design the subsea communication system using copper wire as a medium for transmitting the data signal. Along with the development of technology, optical fibre start to attract engineers and researchers for designing subsea communication system using this particular wire. This paper will focus on the reliability of fibre optic and its application in subsea, including the process, advantages, comparison to copper wire, system design, and its existing application.

Fibre optic communication is become popular as media for signal data to be transferred from transmitter devise to receiver devices. Many people believe that this wire system has some advantages in many aspects. Table 1 show the comparison of several communication devices regarding bandwidth and the distance coverage.

Table 1Comparison of communication devices regarding bandwidth and distance coverage [1]

To understand why the comparison is like the given table, firstly writer explain about component of the fibre optic. Fibre optic wire constructed by 5 main components, there are: core as a propagation medium for data signal to receiving devices, cladding as the first layer that cover the fibre core and also become the light reflector so the electromagnetic wave can travel through the cable, coating as the second layer that protect the core and cladding and usually it made from plastic, srengthening fibers as core maintainer so that the core do not affected by any vibration because of external factor, and cable jacket as the last layer of fibre optic cable and usually the colour is orange [2].

Next is the process of the communication via fibre optic. The communication process via this cable system is by utilize light characteristic. First the electrical data signal that want to be sent, have to be modified into light. To modify it, there are two devices that often used to modify the electrical data, light emitting diodes and infrared laser diodes [2]. Secondly, the light will propagate through the fibre wire, harness light reflection because of refractive index difference between two components inside the wire. After that, the light will be received and changed into electrical signal by receiver devices, PIN photodiodes or Avalanche photodiodes [2].

Other vehicle that commonly used as a media to transfer information is copper cable. This item has two different types, coaxial cable and twisted pair cable. Famous for its electrical properties stability at particular frequency (below 4 GHz), coaxial cable is frequently used for creating local area network (LANs), cable television (CATV) distribution, and for long-range communication using phone. Other type of copper cable is twisted pair cable. This two conductor cable has a self-shielding mechanism that can prevent from magnetic disturbance while transmitting information [3].

Surely, the copper cabling system and fibre optic has its own advantages and disadvantages. It depends on the condition and situation that happened to choose whether using fibre optic or copper cable. However, there are several things that can be compared in order to choose which one is the better medium for transferring information.

From fibre optic point of view, the first aspect is seen from the size factor. It is quite small and light. From many field experience and experiments, the weight of four-core fibre optic cable is around 240 kg/km [3]. This fact make this item more favorite to choose because of its simplicity for mobilization and installation. Second aspect is about robustness from several obstruction, such as electrical, electromagnetic, and radio frequency. This cable type do not affected by those obstruction, even it do not affected by nuclear explosion and nuclear radiation [3]. In addition, it is already a common knowledge that fiber glass is a good isolator and because of that information that being send is not interfered by any electrical factor.

Next aspect to consider is about jointing, connecting and extending the cable. Fibre optic has disadvantages in this important aspect because to make a new connection for cable, it require specific tools and need trained worker. Moreover, the tools price to connect, joint, and extend the cable is relatively expensive. Finally, the last aspect to deliberate is bandwidth. Nowadays, there are already an establish research that using multicore fiber optic can have transmission speed reach 255 Tbit s-1 over 1 km long fibre link [4]. However, it still used in laboratory and have not been implemented in industry.  In average, transmission speed using this glass fibre cable is around 50 Gbps but this amount not consider the multiplexing method. If using multiplexed method (method to combine and superposition wavelength) onto one fiber, the speed can reach more than 1 Tbps [3].

On the other hand, from copper cable wire standpoint, the size and weight are vary from 800 kg/km until 5 tons/km [3]. This weight is depend on the type and quality of the cable. Relatively, the weight is much heavier compared to fibre optic and because of that it is difficult to handle this type of cable. Beside of its size, the copper wire also has another disadvantages in facing some interference. They affected by electromagnetic, radio, electrical, and nuclear magnetic pulses [practical fibre optic]. In addition, copper cable wire also a good conductor and definitely has a bigger possibility to get affected by electrical interference.

Nevertheless, the copper cable has positive benefit in jointing, connecting, and extending term. The method to joint this particular cable is quite easy and the price of the tools is relatively not expensive [3]. Joint, connect, and extend this cable type much cheaper than in fibre optic. The last comparison is about the bandwidth. Although, the speed is not as fast as fibre optic (around 10 Gbps) it still used because of the equipment to support twisted pair copper cable already installed in widely [3]. That is to say, it is more efficient and cheaper if use this cable type rather than fibre optic.

In subsea control system, the device to convert the electrical data into light and received the light and change it into electrical data again are infrared laser diodes and avalanche photodiodes. The reason is because even these devices is more expensive, they are suitable for subsea environment especially in long distance and high speed aspect. Also, the cable that being used is duplex type. Duplex type is used if the communication is two way because it has two fibres, one for send the order, and the other one is to receive the response about the order [3].

When discuss about subsea or deepwater, it is already a common sense that distance from surface to the bottom of the sea is very long and become a challenge for any equipment to work perfectly. This problem also become a challenge for subsea communication system. Communication cable length will be very long and at this point, as already mention before, fibre optic wire has advantages to face this situation. The umbilical that become optical fibre case and lane, will become lighter compare to use copper wire. In accordance to Archimedes principal, the buoyancy force will increase if the weight of the fluid displaced is higher, and this displaced fluid weight is rely on the weight of immersed object. Thus, it makes the installation of the umbilical easier. In addition, the cost will be much cheaper because the price of optical fibre per km is less than price of the copper wire per km. Moreover, subsea environment of course surrounded with sea water. This become a major problem for copper wire as the electrical communication system medium. It can caused system failure if the seawater is enter and meet the copper cable [5].

However, this fibre optic wire system also has challenge to face in subsea environment. Major issue about this system is about the reliability of the fibre optic connector. Many research has been performed regarding this matter.  Almost all of the research [1], [6], [7] believed that the unreliable item is related to the mechanical, not the optic. Vast majority of the problem is occurred over three component of the connector, there are latch finger, bushing, and funnel guide [6]. It happened due to harsh subsea environment. 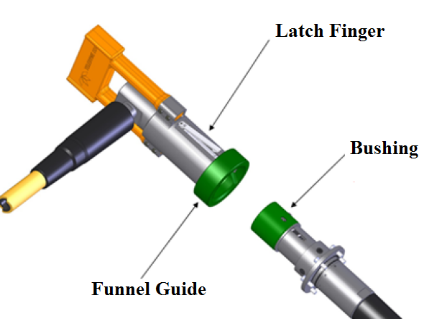 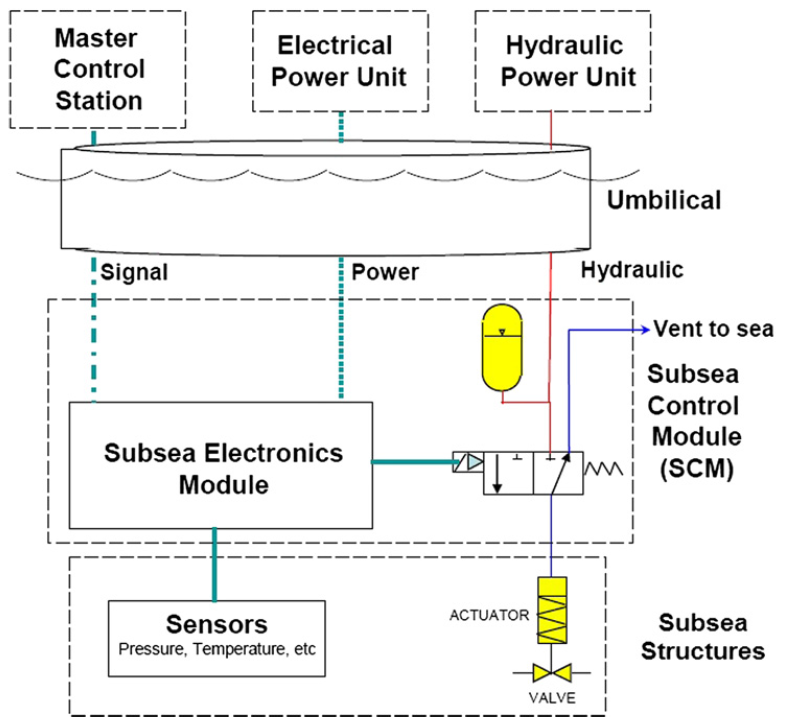 The key component of this control system is Subsea Electronics Module (SEM). The function of this component is to give the response of the order to master control station (MCS) and to run the command order from MCS to equipment in subsea production system, such as valve action [8]. The communication between SEM and MCS is using fibre optics. This kind of distribution system very often to use in subsea production system because of several reasons and considerations. The main reason is because this distribution system connect several SCM to same communications, electrical, and hydraulic source lines [8]. That is to say, one umbilical can supply all of distribution system item into several wells [8]. Because of that, the amount of umbilical is less than other distribution type, and as a result the cost is more reasonable. To make it clearer and to show several key components that related to fibre optic communication, one good example is in Liwan field. Liwan is a natural gas field area that located in South China Sea, approximately at 300 km south east of Hong Kong and has 1500 m maximum water depth [9]. This field is operated by China National Offshore Oil Corporation (CNOOC) for shallow water facilities and Husky Oil China Ltd (HOCL) for deepwater/subsea facilities with production sharing contract agreement [9-10]. The production rate of this field is about 250 mmcf/day and targeted to reach 300 mmcf/day by the end of 2014 [10].

The function of this topside located equipment is to control, monitor, and supply power in order to make production in subsea work perfectly. Sometimes people also call this equipment as Subsea Control Unit (SCU) [12-13]]. Human Machine Interface (HMI) is used to input order and receive output data from this SPCU. In this Liwan project, to send data or give order to Subsea Control Module (SCM), use level 3 communication devices called Ethernet TCP/IP through fibre optic cable [11]. In addition, fibre optic also used to connect SPCU to Hydraulic Power Unit (HPU). This allow SPCU to monitor the HPU status. Furthermore, SPCU has redundant Programmable Logic Controller (PLC) which used for observing Electronic Power Unit (EPU) and Emergency Shutdown Devices (ESD) via Master Control System (MCS). The communication between EPU to MCS, in order to show its status, use Ethernet communication links. It means, it also used fibre optic to connect both of the equipment [11].

As mention in point number 1, SCM connected to SCPU by fibre optic Ethernet TCP/IP.  This connection consist of two optic fibre for receive and transmit the data signal with data rate speed is 100 Mbit/s [11].

All of data signal that requested is received by topside computer which connected to SCPU. The data signal characteristic is added with checksum and will be checked in topside computer. If the checksum message that sent is have coherency with checksum in database, the message will received [11]. Vice versa, if it does not have coherency, the message will be disallowed and then the operator can have a choice, whether to request data again or check the problem because this accident show that there is a probability of failure in the system [11].

In conclusion, fibre optic in subsea application already became a proven technology and more reliable. It can be shown by it superiority against copper cable system from several aspects such as weight/size, cost, and data speed rate. Moreover, installation of umbilical in subsea will be much easier if use the fibre optic as the communication system medium. Although optical fibre still has some challenges in subsea environment, this wire system still reliable. It can be shown from the existing example of project that use the optical fibre, the Liwan Field that use multiplexed electro/hydraulic distribution system. 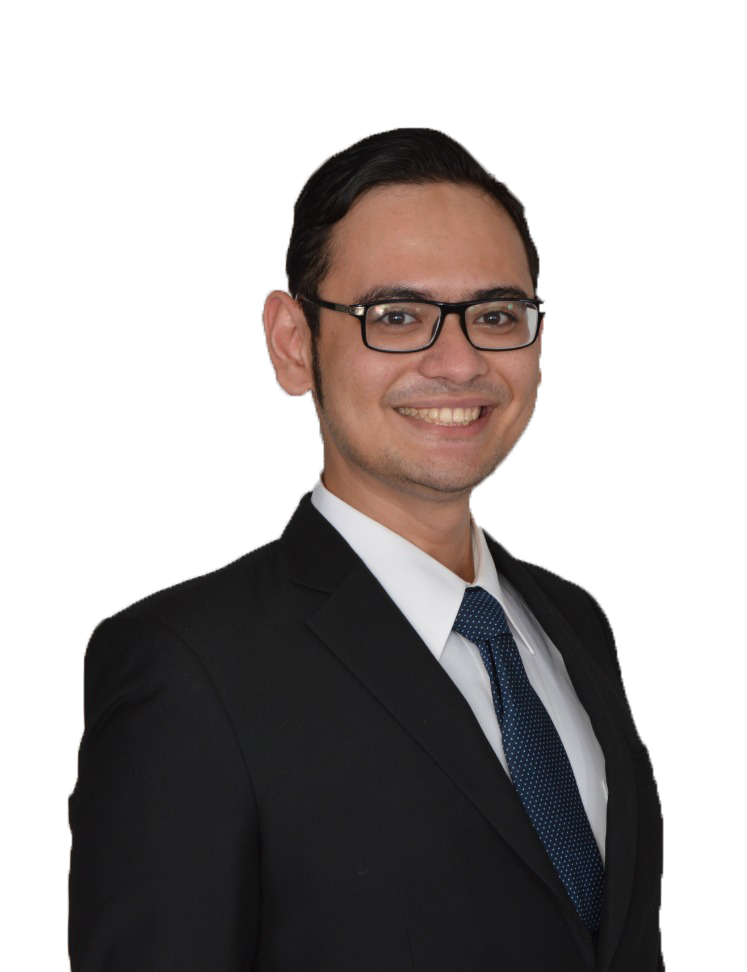